Premarital Agreements - Which Pact Before "Yes"?

Premarital Agreements - Which Pact Before "Yes"? 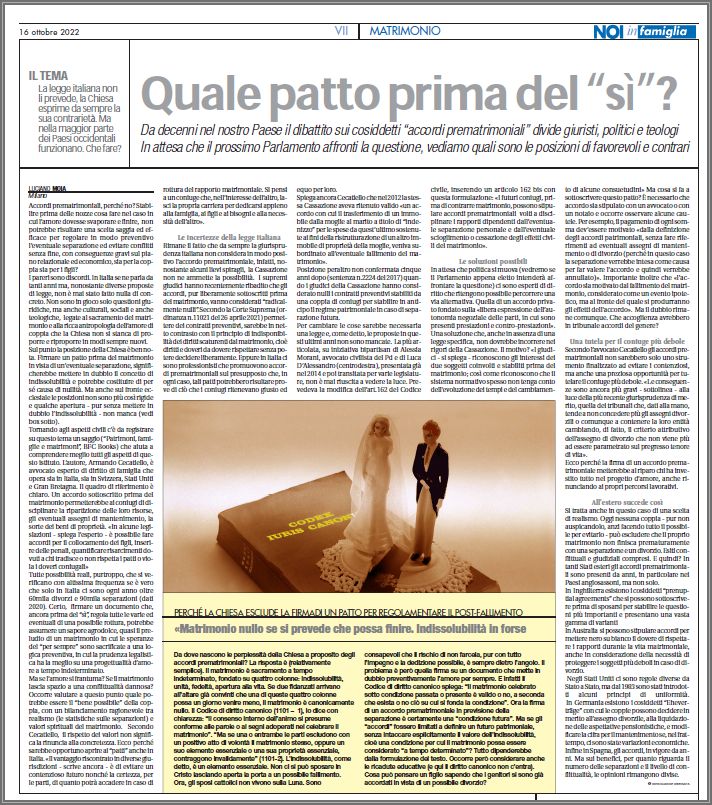 Interviewed by the newspaper Avvenire, Avvocato Cecatiello delves into the issue of premarital agreements. Article edited by by Luciano Moia, Avvenire, October 16, 2022.

Which pact before the "yes"?
For decades in our country the debate on the so-called "prenuptial agreements" has divided jurists, politicians and theologians. While waiting for the next Parliament to tackle the issue, let's see what the positions are for and against.

The theme
The Italian law does not provide for them, the Church has always expressed its opposition. But in most Western countries they work. What to do?

Premarital agreements, why not? Establishing before the wedding what to do in case love evaporates and ends, could not be a wise and effective choice to preventively regulate any separation and avoid endless conflicts, with serious consequences on the relational and economic level, for both the couple and the children?

Opinions are divided. In Italy it has been talked about for many years but, despite several bills, nothing concrete has ever been done. Not only juridical issues are at stake, but also cultural, social and even theological ones, linked to the sacrament of marriage and the rich anthropology of love as a couple that the Church never tires of proposing and re-proposing in ever new ways. On this point, the position of the Church is well known. Signing a pact before marriage with a view to a possible separation would mean questioning the concept of indissolubility and could in itself constitute a cause of nullity. But also on the ecclesial front the positions are no longer so rigid and some openness - although without doubting the indissolubility - is not lacking (see box below).

Returning to the civil aspects, there is an essay on this subject ("Weddings, families and weddings”, BFC Books) which helps to better understand all aspects of this institution. The author, Armando Cecatiellor, is a family lawyer who works both in Italy, Switzerland, the United States and Great Britain. The reference framework is clear. An agreement signed before the marriage would allow the spouses to regulate the distribution of their resources, any maintenance allowances, the fate of their property. "In some legislations - explains the expert - it is possible to make agreements for the placement of children, insert penalties, quantify compensation due to those who betray or do not respect agreements or violate marital duties"

All real possibilities, unfortunately, which occur very frequently if it is true that in Italy alone there are over 60 divorces and 90 separations every year (2020 data). Of course, signing a document that, even before the "yes", regulates all the various and possible events of a possible break, could take on a bittersweet flavor, almost the prelude to a marriage in which the hopes of "forever" are sacrificed to a preventive logic, in which legalistic prudence prevails over an open-ended love plan.

But what if love shatters? What if marriage leaves room for harmful conflict? It is necessary to evaluate at this point what could be the "possible good" of the couple, with a reasonable balance between realism (the statistics on separations) and the spiritual values ​​of marriage. According to Cecatiello, respect for values ​​does not mean renouncing concreteness. This is why it would be appropriate to open the "pacts" also in Italy. «The advantage found in various jurisdictions - he writes again - is to avoid future litigation as well as the certainty, for the parties, of what may happen in the event of a break in the marriage relationship. Think of a spouse who, in the interest of the other, leaves his career to devote himself fully to the family, to the children and to the needs and necessities of the other ».

The uncertainties of the Italian law The fact remains that the Italian jurisprudence has always not considered the prenuptial agreement in a positive way, in fact, despite some slight glimmers, the Supreme Court does not admit the possibility. The supreme judges have recently reiterated that the agreements, although freely signed before marriage, must be considered "radically void". According to the Supreme Court (Ordinance No. 11021 of April 26, 2021) to allow preventive contracts, would be in stark contrast to the principle of unavailability of the rights arising from marriage, that is, rights and duties to be respected without being able to decide freely. Yet in Italy there are professionals who promote prenuptial agreements on the assumption that, in any case, such agreements could prove to be evidence of what the spouses deemed fair and equitable for them.

Cecatiello further explains that in 2012 the same Supreme Court had considered valid "an agreement by which the transfer of a property from the wife to the husband as" compensation "for the expenses incurred by the latter for the purpose of renovating another property owned of his wife, was subordinated to the eventual failure of the marriage ».

However, this position was not confirmed five years later (sentence 2224 of 2017) when the judges of the Supreme Court considered the preventive contracts established by a married couple to establish the property regime in advance in the event of future separation as null and void.

A law would be needed to change things and, as mentioned, there has been no lack of proposals in recent years. The most articulated, on the bipartisan initiative of Alessia Morani, civil lawyer of the Democratic Party and Luca D'Alessandro (center-right), presented already in 2014 and then passed through various legislatures, has never managed to see the light. It provided for the amendment of Article 162 of the Civil Code, inserting an Article 162 bis with this wording: "The future spouses, before getting married, may enter into prenuptial agreements aimed at regulating relationships depending on any personal separation and any dissolution or cessation of the civil effects of the marriage ".

Possible solutions While waiting for politics to move (we will see if the newly elected Parliament intends to address the issue), there are legal experts who believe it is possible to take an alternative route. That of a private agreement based on the "free expression of the parties' negotiating autonomy, in which there are performances and counter-performances". A solution that, even in the absence of a specific law, should not incur the rigors of the Supreme Court. The reason? «The judges - it is explained - recognize the interests of the two parties involved and established before the marriage; just as they recognize that the regulatory system often does not take into account the evolution of the times and the change in some customs »But what do you do to sign this pact? An agreement must be entered into with a lawyer or notary and some precautions must be observed. For example, the payment of each sum must be motivated "by the definition of the patrimonial agreements, without making reference to any maintenance or divorce allowances (because in this case the separation would be understood as a cause for enforcing the agreement and therefore would be canceled)". It is also important that "the agreement is motivated by the failure of the marriage, considered as a hypothetical event, but against which the effects of the agreement will be produced". But the doubt still remains. What reception would such agreements have in court?

Protection for the weaker spouse. According to the lawyer Cecatiello, prenuptial agreements are not only a tool aimed at avoiding disputes, but also a precious opportunity to protect the weaker spouse. "The consequences are even more serious - he underlines - in the light of the most recent case law, that of the courts which, given in hand, tends to no longer grant divorce allowances or in any case to contain their entity by changing, in fact, the criterion attributive of the divorce allowance which is no longer parameterized on the previous standard of living ".

This is why the signing of a prenuptial agreement would protect those who have invested everything in the love project, even giving up their work paths.

This is how it happens abroad. In this case too it is a question of realism. Today no couple - even if they do not wish for it, indeed doing everything possible to avoid it - can exclude that their marriage does not end prematurely with a separation and divorce. Conflict and judicial outcomes included. So what? In many foreign countries, prenuptial agreements have been present for years, particularly in Anglo-Saxon countries, but not only. In England there are so-called "prenuptial agreements" that can be signed before getting married to establish the most important issues and have a wide range of variants

In Australia, agreements can be drawn up to put on paper the duty to respect relationships during married life, also in consideration of the need to protect the weakest subjects in the event of divorce. In the United States, there are different rules from state to state, but some principles of uniformity have been introduced since 1983.

In Germany there are the so-called "Eheverträge" with which couples can decide on the divorce allowance, the liquidation of pension expectations, and change the amount for maintenance if, in the meantime, there have been economic changes. Finally, in Spain, the agreements, which have been in force for years. But on the benefits, regarding the number of separations and the level of conflict, opinions remain divided.

WHY DOES THE CHURCH EXCLUDE THE SIGNING OF AN AGREEMENT TO REGULATE THE POST-BANKRUPTCY?

Null marriage if it is expected to end. Indissolubility in perhaps.

Where do the Church's perplexities about prenuptial agreements arise from? The answer is (relatively simple). Marriage is a sacrament for an indefinite period, founded on four pillars: indissolubility, unity, fidelity, openness to life. If two engaged couples arrive at the altar already convinced that one of these four columns may one day fail, the marriage is canonically null. The Code of Canon Law (1101 - 1) clearly states: "The internal consent of the soul is presumed to conform to the words or signs used in celebrating marriage". "But if one or both parties exclude marriage itself, or an essential element or property thereof, by a positive act of will, they contract invalidly" (1101-2). Indissolubility, as mentioned, is an essential element. One cannot marry in Christ leaving the door open to possible failure. Now, Catholic spouses don't live on the moon. They are aware that the risk of not making it, even with all the effort and dedication possible, is always around the corner. The problem, however, is that signature on a document that previously questions love forever. And in fact the Code of Canon Law explains: "Marriage celebrated under past or present conditions is valid or not, depending on whether or not what the condition is based on exists or not". Now the signing of a prenuptial agreement in anticipation of separation is certainly a "future condition". But what if the "agreements" were limited to defining a patrimonial future, without explicitly affecting the value of indissolubility, that is, a condition for which marriage can be considered "for a fixed term"? Everything would depend on the wording of the text. However, the educational implications must also be considered (and here canon law has nothing to do with it). What can a child think knowing that the parents have already agreed on a possible divorce?

The Cecatiello Law Firm advises its clients for the best management of both consensual and judicial separation and divorce proceedings, asset protection, custody of minors, collaborative practice.