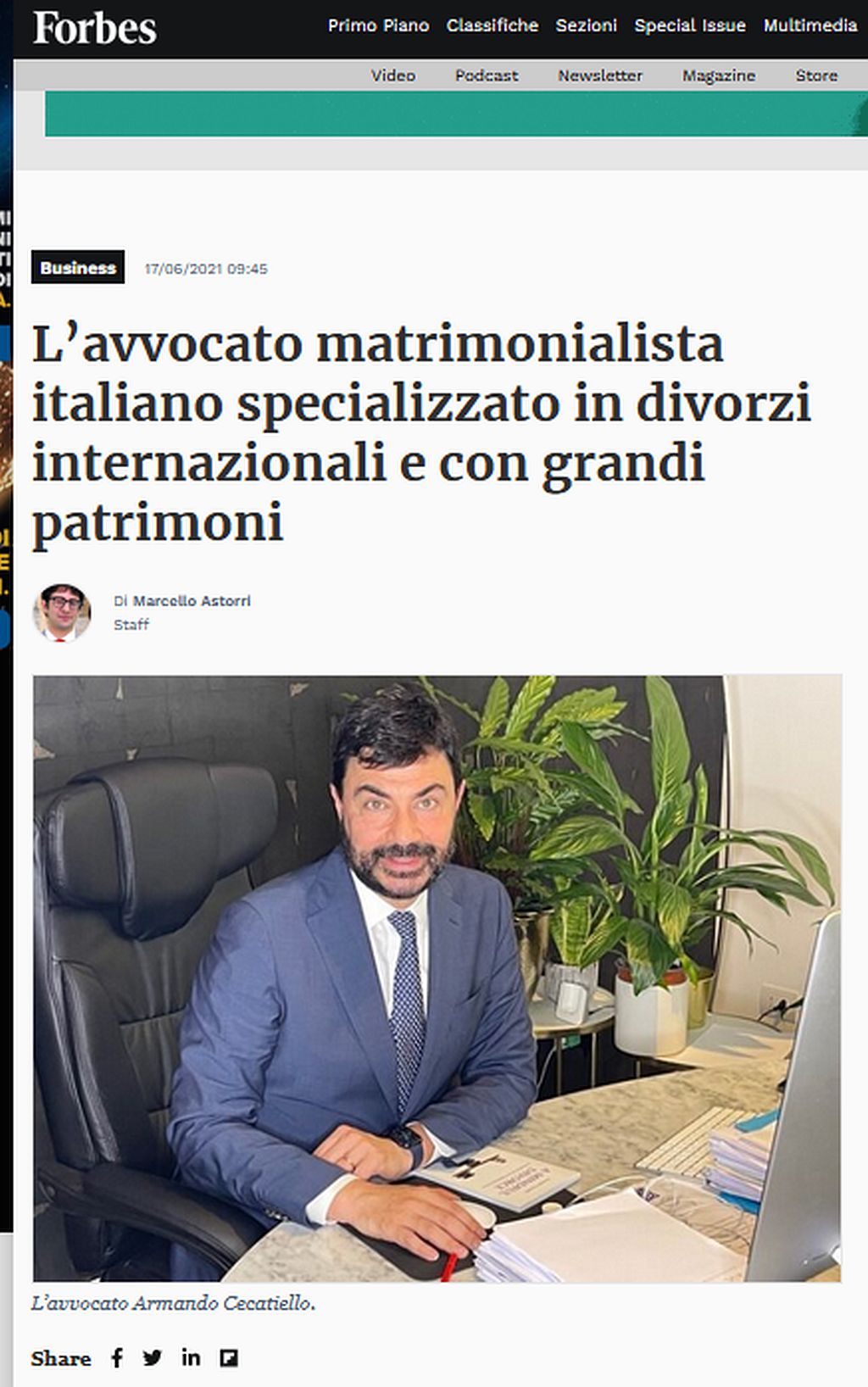 Interviewed by Forbes magazine, Avvocato Cecatiello delves into the issues of international divorce and the protection of assets. Edited by Di Marcello Astorri.
Full article available on Forbes at page: https://forbes.it/../lavvocato-matrimonialista-italiano-specializzato-in-divorzi-internazionali../

He is one of the most requested matrimonialists in Italy, a specialist in international divorces and with important assets, an expert in collaborative practice, an alternative procedure to litigation, born in the United States and now widespread throughout the world that accompanies couples in crisis to separate in constructive way. It's about the lawyer Armando Cecatiello, a professional who has contributed to the diffusion of collaborative practice in Italy, after having understood its potential in his international experiences. Today his studio is enjoying great success, even abroad, which is why has opened a second office in Lugano, in addition to that of Milan. And, for the future, he has already received a request to start a desk in London.

"The decision arose from the request of international clients residing in Switzerland who wanted to use the services of my studio and the method of collaborative practice to end the marriage", explains Cecatiello a Forbes, “Many were willing to come to Milan, but to assist them in the best possible way I decided to open a second studio and I will divide myself between the two offices”.

In  2010 another turning point takes place, following some divorce procedures in the United States, where he also met his wife, discovered Collaborative Practice and the IACP international association of collaborative professionals of which he is still an active member, trainer and lecturer today. From here he decides to develop the collaborative method also in our country.

"It is a way to put the interests of the parties at the center together with the children and bring parental couples to assume their responsibilities ", Cecatiello observes," and takes into account people and their feelings. The negotiation is based on the interests of each one, which then leads the spouses to find the agreements that derive from their real needs. Going beyond mere standpoints on principle, which are then responsible for the worst conflicts ".

The specialization in family law and human skills led him to be often appointed by the Court of Milan as Special Curator of minors in separation and divorce proceedings with very high parental conflict.

Furthermore, the uncertainty deriving from the pandemic has prompted people to better consider the patrimonial aspects with respect to life choices. “There is a growing demand on the part of clients to have their assets protected in view of the marriage,” adds the lawyer. "More and more people are turning to the studio to try to plan future patrimonial issues in view of marriage, cohabitation but also with respect to the generational change".

Until also in Italy there will be the prenuptial agreements it is necessary to consult an expert lawyer before getting married or regulating a cohabitation. "Who  chooses not to marry, in the interest of the economically weaker party, is protected by cohabitation contracts. Trusts are an institution increasingly used also in our country to protect assets and plan possible future events, even if not positive, such as the crisis of family relationships ".

The Cecatiello Law Firm advises its clients for the best management of both consensual and judicial separation and divorce proceedings, asset protection, custody of minors, collaborative practice.