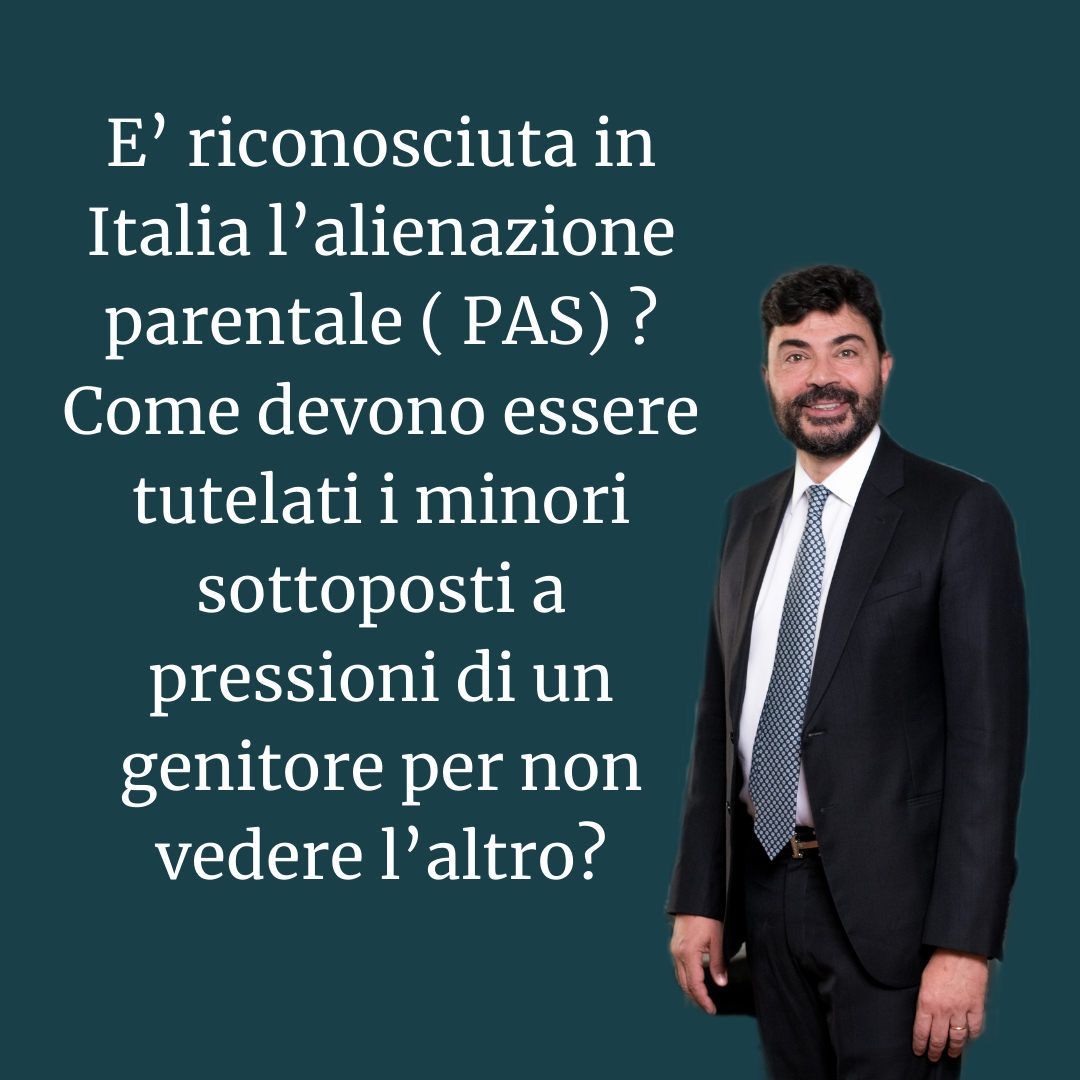 Is parental alienation (PAS) recognized in Italy? How should minors who are pressured by one parent not to see the other be protected?

In Italy, the child has the right to two parents.

The principle of  double parenthood was defined as the common presence of the parents in the life of the child, suitable for guaranteeing stability and strong emotional relationships with both, in the duty of mother and father to cooperate in assistance, education and instruction (Cass. 28723/2020).

This right is also recognized by the Court of Cassation for the parent, specifying that it is the right to establish and consolidate ongoing and significant relationships and relationships with the child.

The right of the minor always deprives that of the parent.

The cardinal principle of our legal system but also of the more advanced ones at an international level is in fact the best interests of the minor, as sanctioned worldwide.  by the Convention on the rights of the child (art. 3) and by art. 337-ter of the Italian Civil Code,  principle which requires that in decisions concerning him, in the face of a conflict of interests,  parent - child, that of the minor always prevails.

On the basis of these fundamental principles the Court of Cassation in a recent ruling  analyzes the case of a  mother who had had behaviors aimed at hindering the relationship between her son and father.

The court ruled that  said behaviors, even if established, cannot automatically entail, ipso facto, the woman's forfeiture of parental responsibility, as an extreme measure that inevitably cuts off any relationship with her child.

In fact, it is necessary to consider the consequences for the minor uprooted from the family context, in which he grew up peacefully, and estranged from his mother by whom he was in any case lovingly cared for.

This means that the court negatively assessed those measures, often reported in the news, where the children were taken from their mothers so-called alienating and temporarily placed in communities and / or in other families waiting to be relocated to their father.

The Court of Cassation then affirmed the principle, recalling its jurisprudential precedents, that if a parent denounces the behavior of the other, of moral and material estrangement of the child from himself, which indicate the existence of the so-called parental alienation syndrome (PAS), the the trial judge is required to ascertain the veracity of the fact of the aforementioned behaviors, using the common means of proof, typical and specific of the matter, including presumptions, and to adequately justify. The Court, as the trial judge, must  evaluate the facts regardless of the abstract judgment on the scientific validity or invalidity of the aforementioned pathology, taking into account that among the parental suitability requirements the ability to preserve the continuity of parental relations with the other parent is also relevant, to protect the child's right to dual parenthood and balanced and serene growth (Cass. 25339/2021; 13274/2019).

The reference to the parental alienation syndrome, as previously emphasized by the jurisprudence, therefore cannot be considered legitimate, as it constitutes the pseudoscientific basis of seriously incisive provisions on the life of minors, in order to forfeit the mother's parental responsibility (Cass. 13217 / 2021).

In order to protect the right to dual parenthood, the facts must be adequately proven,  and it must also be ascertained whether the parent's conduct  whether or not it caused parental alienation, but, if the conduct was such as to have seriously damaged the relationship between the child and the other parent, up to the worst possible result, that of making it difficult to recover or completely irrecoverable.

La  Court of Cassation  indeed  several times affirmed, trying to overcome the contrast on the scientific nature or otherwise of the PAS, that alienating behaviors, of estrangement or cancellation of the other parent from the children, are in any case not compatible with parental suitability.

The Cassation then underlined the importance of listening to the  minor by the trial judge reiterating that in the context of a proceeding relating to the custody of children, in compliance with the consolidated jurisprudential orientation, listening to the under-XNUMX-year-old minor capable of discernment constitutes a fulfillment provided for under penalty of nullity, to protect the principles of contradictory and due process and is expressly intended to collect your views and assess your needs.

Such fulfillment cannot be  replaced by the results of a technical consultancy from the office, which fulfills the different need to provide the judge with other evaluation tools to identify the solution most suited to his interest (Cass. 23804/2021; 1474/2021).

The protection of the minor is achieved through the provision of his listening. It therefore constitutes a violation of the adversarial principle and of its rights if it is not supported by adequate reasons on the absence of discernment, such as to justify its omission (Cass. 16410/2020; 12018/2019).

The Cassation then concluded that the methods of execution of the removal order, consisting in the use of force aimed at removing the child from the place where he resides with his mother, to place him in a family home, does not appear to be a measure in accordance with the principles of the State. of law, and could cause significant and unpredictable trauma. The Supreme Court highlights how, among the measures that can be taken into consideration to make the principle of two-parenting effective, the use of economic sanctions pursuant to art. 709-ter of the Italian Civil Code, against that parent, who willfully or negligently evades the prescriptions given by the judge.