The Law Firm Cecatiello always tries to favor the reaching of an agreement between the spouses to sign a consensual separation.
The consensual separation is always preferable: going to court already with a desired and shared agreement is the ideal situation to start a new life. Unfortunately there are cases in which the spouses just cannot reach an agreement. It can happen for various reasons, the most frequent are excessive economic demands, total lack of communication, the persistence of an irremediable conflict, the inability to find an agreement on the custody and management of children.

In such situations, one must resort to the judicial separation.

Judicial separation is the procedure by which a separation sentence is obtained.

The separation does not reduce the status of a spouse but affects some typical obligations of marriage: the obligation of cohabitation and fidelity as well as the communion of goods expire (if that was the property regime chosen by the spouses).
However, the obligations of maintenance of the spouse, of participation in the management of the family and of education of the children remain.

Judicial separationaccording to the Italian Civil Code, it can be obtained on the request of a party or because there have been violations of matrimonial obligations by one of the spouses or because there are objective circumstances that make the continuation of the relationship no longer sustainable.
The process begins with an appeal to the president of the court, as a rule, in the place where the couple's last residence is identified.

The appeal must indicate the elements on which the request is based and the declaration on the existence of offspring.
The President of the Court accepting the appeal fixed by decree the date of the hearing of appearance of the spouses.
Whoever presented the appeal will have to notify the decree to the other spouse. The appearance hearing takes place before the president of the court only.

The spouses must appear obligatorily and personally; if the spouse is not presented (the person who promoted the process) the president declares the trial extinct.

If the defendant spouse does not appear, the president will have to set a new hearing and eventually decide by order on urgent matters that cannot be postponed to the next hearing. The president of the court makes an attempt at conciliation in which he tries to make the parties desist from their intent to separate: if the parties agree and reconcile, the president draws up the minutes and the case is extinguished, if the parties do not agree then the president is obliged to continue the case before the investigating judge. The order by which the president of the court refers the case to the investigating judge contains the so-called provisional measures: decisions relating to the economic sphere (housing assignment, spouse maintenance) and those decisions relating to the custody and placement of children.

The stage before the investigating judge is similar to a process of cognition with an ordinary rite.

The judge can issue a non-final sentence of separation with which he immediately decides the separation and continues the cause only to resolve the other issues. If requested, the judge charges one of the two parties for the separation (the one who violated marital duties) and this affects the inheritance rights and the maintenance allowance. 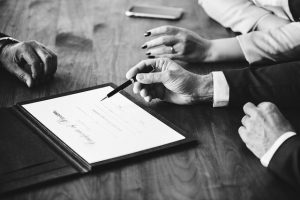