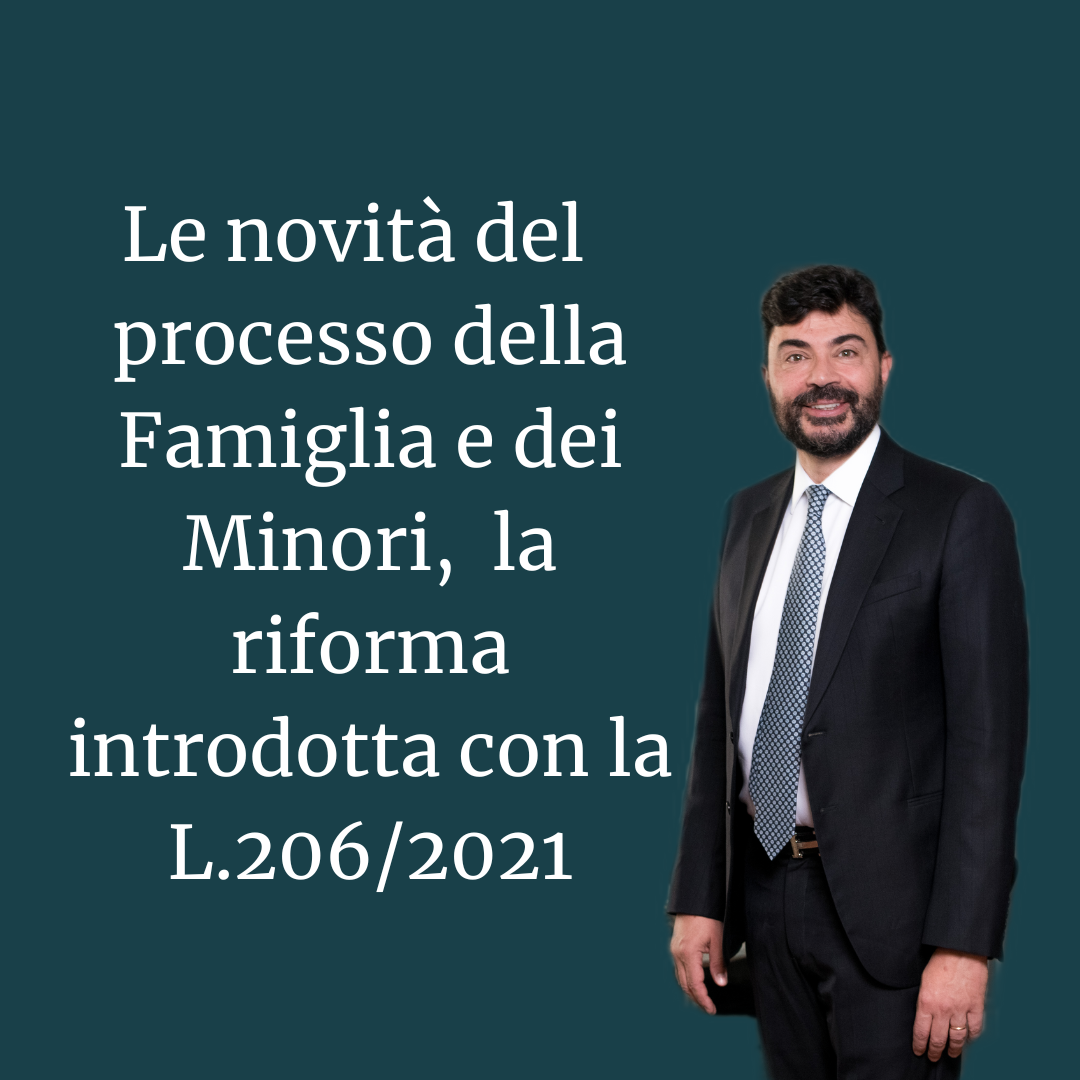 The news of the  process of the Family and Minors,  the reform introduced with Law 206/2021

The changes introduced by the new legislation will be  implemented in 3 phases, the first of which will start right from 22  June and will apply to proceedings introduced with an appeal filed after 22 June 2022.

The Special Curator of the Minor

The reform  intervened on the provisions of art. 78 and art. 80 of the Code of Civil Procedure, finalizing and expanding the legislation on the Special Curator by incorporating the most recent jurisprudential practice.

The reform specified when   the minor must be recognized as part of the process and sanctioned the cases in which it must be  appointed one of his representatives, as the special curator.

Without prejudice to the need for the appointment of the special curator in the event of a conflict of interest of the minor with his or her parent, the reform established the other  hypothesis in which the judicial authority is called to appoint a special curator for the minor, distinguishing those in which this appointment is mandatory under penalty of nullity:

The revocation of the special curator has also been envisaged  and this is due to serious breaches or due to the absence of the conditions for his appointment.

Another consequence of the reform are i powers of a substantial nature of the Trustee,  e the obligation for the Curator to listen  il  lower and allows the same minor who has reached the age of 14, the parents, the guardian and the public prosecutor, to request, with a motivated request, the revocation of the curator.

In this way, the separate original figures of the curator and the defender of the minor come to be concentrated in the new Curator.

News on the subject of assisted negotiation

With the reform, the possibility of resorting to assisted negotiation is extended, which was envisaged only for separation, divorce and related amendments.

Failure to comply with family measures

Very often the provisions relating to parenting times are not respected and these behaviors  was already subject to censorship.  The new formulation of art. 709-ter cpc now provides that the judge with a provision will be able to identify the daily sum due for each day of violation and / or non-compliance with the provision.

The new reform provides for a specialization for technical consultants in family matters and the drafting of a register  specialized expert witnesses who will be obliged, as already happens for many professionals including lawyers, to specific permanent training.

It is  created a special single register from which magistrates and lawyers will be able to draw consultants.

Competences of the Ordinary Court

With the reform it is modified  art. 38 avail. att. cc, on the competences of the court for minors and those  of the ordinary court.

The only limit is represented by art. 709-ter cpc which, if referred to the implementation of measures issued by the court for minors, must necessarily be introduced before the latter, while where it is introduced autonomously and is proposed before the Ordinary Court, a transfer of the procedure is necessary before the first judicial authority.

The article in the previous version, completely out of date, had been introduced in the Fascist era and provided for the removal   of urgency for decision  and carried out by the Public Authority without the provision of immediate control by the judge.

Article  contained within it expressions certainly not in line with the current sensitivity such as "minor raised in unhealthy or dangerous places" or  “People for immorality, ignorance  unable to provide for his education.

The article was completely  rewritten and expressly provided for the control of the Court on the procedure for the removal of the minor. The conditions for such serious intervention concern the cases in which the minor is exposed to serious harm and danger for his psycho-physical safety.

The law now provides  a complex judicial review  on the action of the Public Authority by the Public Prosecutor and the Juvenile Court  and listening to the parties and the child.

Furthermore, adequate times have been provided for the verification procedure which, by its nature,  it must be fast.

Within a year of the publication of the law, therefore by the end of 2023  the Government is required to issue  one or more legislative decrees for:

1)  creating a  judicial rite  single, single procedure,  for all disputes relating to persons, minors and families, for all proceedings relating to the status of persons, minors and families within the jurisdiction of the ordinary court and the court for minors, with the exception of proceedings for the declaration of the status of adoptability, the adoption of minors, in matters of immigration.

2)  introduce interventions in the field of assisted family negotiation:  the agreements reached following the execution of the assisted negotiation may also contain real estate transfer agreements with mandatory effects. The  congruity judgment can be made by the defenders with the certification of the agreement of the parties and the agreements, provided with clearance or authorization,  they will be kept in original, in a special archive, held at the Councils of the Bar Association.

Always within one year of the publication of the law  the Government is delegated to adopt one or more legislative decrees for the establishment of the Tribunal for Persons, Minors and Families, the so-called Court for families.

The District Sections they will decide in monochromatic composition and will be competent on all procedures  de potestate, until now attributed to the TM on the basis of the provisions of art. 38 avail. att. cc, on the measures  ex art. 403 of the Italian Civil Code and of alternative family custody referred to in ln 184 of 1983; on proceedings  relating to state actions (excluding, however, those relating to citizenship, immigration and international protection), those relating to the capacity of individuals and all disputes concerning civil unions, more uxorio cohabitations, minors, proceedings under the jurisdiction of the tutelary judge and compensation for intra-family damage.

The District Sectionsinstead, they will decide in collegiate composition and will see the attribution of competences in civil, administrative, criminal, surveillance and adoptability and adoption matters, currently attributed to the Juvenile Court; finally, they will also be competent in relation to appeals against provisional or definitive measures, issued by the district sections.