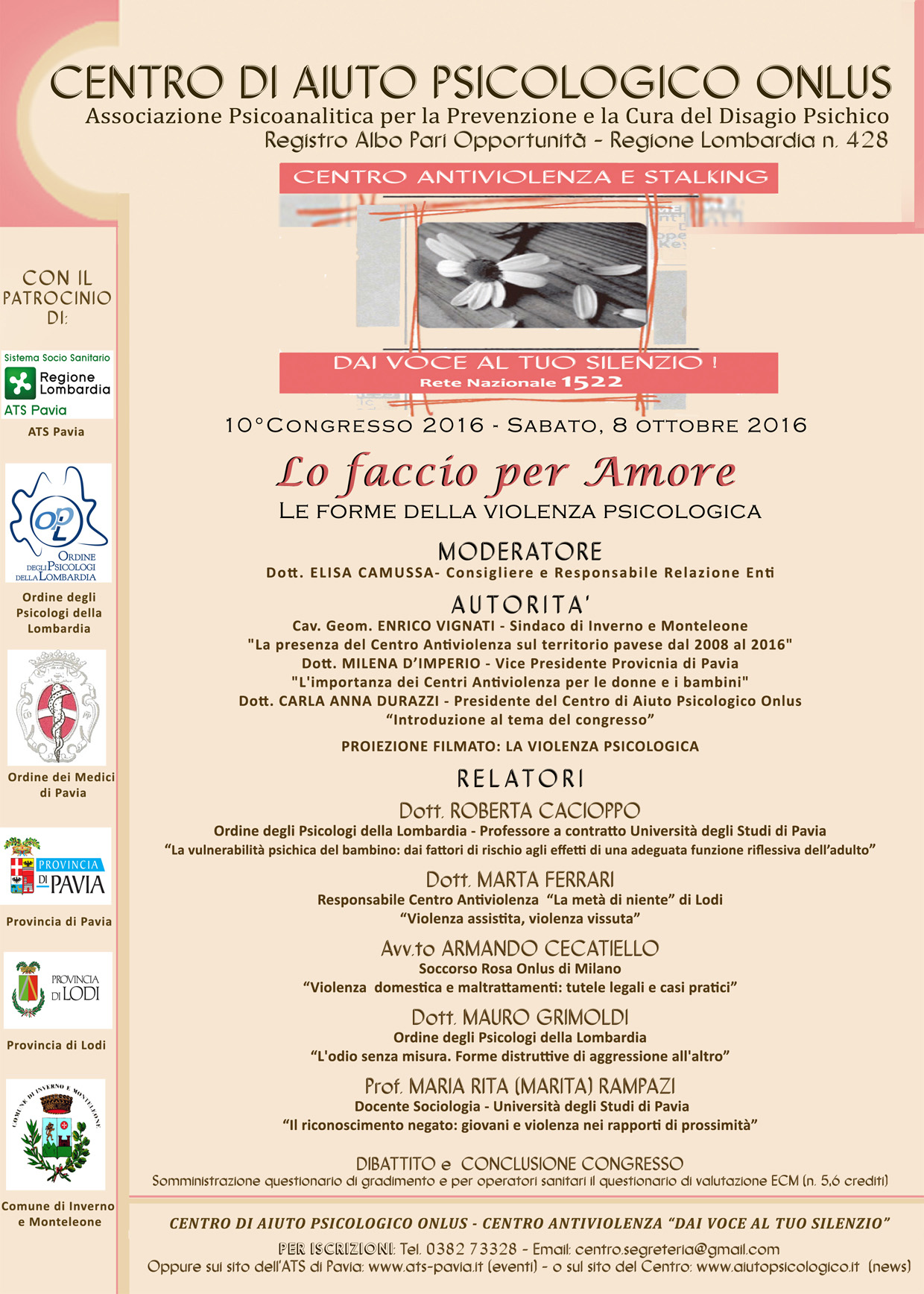 On 8 October 2016, the lawyer Armando Cecatiello participates in the 10th Congress of "Psychological Help Center Onlus", On the forms of psychological violence entitled"I do it for Love [click to download the event brochure]". The congress took place in the headquarters of the Center, Cascina San Giuseppe 18, 27010 Invemo and Monteleone (Pavia).

"Psychological violence: harming and denigrating the other up to the mortification of the other person's Self".

Presentation of the Congress:

AUTHORITY
Cav. Geom. ENRICO VIGNATI - Mayor of Winter and Monteleone
"The Anti-violence Center in the Pavia area from 2008 to 2016"
Dr. MILENA D'IMPERIO - Vice President of the Province of Pavia
"The importance of anti-violence centers for women and children"
Dr. Carla Anna Durazzi
President of the Onlus Psychological Aid Center "Introduction to the theme of the congress"
Movie screening: Psychological violence

SPEAKERS
Dr. ROBERTA CACIOPPO
Order of Psychologists of Lombardy - Adjunct Professor Univeristà of Pavia
"The psychic vulnerability of the child: from risk factors to the effects of an adequate reflexive function of the adult"
Dr. MARTA FERRARI
Head of the “Half of Nothing” anti-violence center in Lodi
"Witnessed violence, lived violence"

PRESENTATION
The title chosen "I do it for love" proposes the examination and understanding of those ambivalent dynamics that come into play in relationships and that often result in behavior of abuse and psychological violence.
There are various forms of violence, but one in particular is extremely powerful and painful, basically silent and underground, invisible to most people and often not recognized by the victims themselves. It is, in fact, of thethe psychological violence that often precedes and anticipates other forms of violence, often a prelude to physical violence itself.
Precisely because it often passes in silence, but in a creeping manner, determining in reality extremely serious damages, it is fundamental to be able to recognize, as soon as possible, the signals and the true nature and scope.
It is often underestimated because it is not easily recognized: it is a form of violence, however, very widespread that manifests itself through behaviors and words that haveintent to harm and denigrate the other up to the mortification of the other person's Self. In other words, the victim is progressively, but inexorably, deprived of his individual and personal dignity and will, to transform himself into an object to be possessed in an exclusive way, not recognized in his condition as an "other" person, deserving of respect and freedom. . Psychological violence therefore consists of attacks directed at to strike personal dignity, starting from subtle almost imperceptible critiques, to the lack of respect, to attitudes aimed at constantly reiterating a state of subordination and a condition of inferiority. The continuous implementation of these behaviors can lead to a real destructive process of one's own self on a psychic level. Our purpose, therefore, is to try to analyze and understand the unconscious motivations behind a relationship of abuse or violence.