Provided and point by art. 572 of the criminal code of rite, the crime of mistreatment in the family aims to protect the health and psycho-physical integrity of subjects belonging to a family or para-family context, as reformed by the 2012 legislative novel.

This criminal offense occurs whenever a person makes himself the author of violent, aggressive, intimidating and harassing behavior towards a person belonging to his family or in any case with his partner, a person subject to his responsibility or who has been entrusted to him for reasons of education, instruction, care, supervision or custody or for the exercise of a profession or an art.

In other words, the crime of mistreatment in the family occurs only when the existence of conduct is necessarily established habitual that takes the form of several facts detrimental to physical or moral integrity or the freedom or dignity of another person.

It is immediately evident that we do not consider family people, as was the case in the past, only the spouse, relatives, relatives, adoptees and adopters.

Following the 2012 reform, in fact, this concept was also extended to the partner more uxorio, to all those who are linked by a kinship relationship with the abuser even to domestic servants if they live with him; as established by the Court of Cassation (see Cass. sentence no. 31121/2014) “There is the crime of mistreatment in the family pursuant to art. 572 of the Italian Criminal Code whenever the relationship presents intensity and characteristics such as to generate a stable relationship of trust and solidarity ".

Coming within the scope of the term mistreatment, according to the doctrine and the majority jurisprudence, the person who puts in place can be classified as "mistreatment" commissive acts, but also omissive, abusive, oppressive, oppressive, humiliating, repeated over time, such as to produce appreciable physical, moral and economic suffering in the victim to the point of jeopardizing the full and satisfactory development of the personality.

The notion therefore includes both physical aggressions in the strict sense (beatings / injuries), as well as acts of harassment, contempt, abuse that significantly affect the individuality of the abused person suffering moral and / or physical suffering.

It is interesting to draw attention to the judgment of the Court of Cassation n. 36503/2011, which confirmed the conviction for the crime of mistreatment in the family against a mother and grandfather who, for "Over-protection and attention" they had in fact prevented a harmonious and peaceful psycho-physical development of the son / grandson.

It is precisely from the analysis of the jurisprudence of legitimacy that we can easily deduce the characteristics of the crime of mistreatment in the family:

It is primarily a crime just, as the same can be integrated not by anyone, but only by those who are in a certain position with respect to the victim.

It's a crime habitual, as the conduct carried out by the active subject may be irrelevant if considered individually, then acquiring different thickness and gravity if continued and protracted over time "The violent attitudes, which characterized the quarrels between the spouses, if not suitable for configuring the most serious crime of mistreatment because they lack continuity and systematic action, can at most integrate other types of crime, which can also be prosecuted for  complaint biased " (see Court of Supreme Court, sixth penal section, in the judgment no. 40936/2017)

Finally, for the configuration of abuse in the family, the generic fraudthat is, the will to cause a series of negative consequences to arise in the victim through his or her behavior. 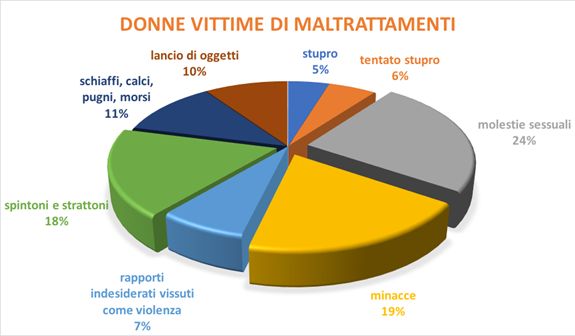 The crime in question, mind you, absorbs the offenses of injury, beatings, threats, minor or very slight injuries, when it is culpable. If the injuries are voluntary, the two crimes concur. Likewise, serious or very serious injuries or death if voluntary are not absorbed, if instead they were the consequence not wanted by the agent, the aggravating factors described below will be applied.

La The basic penalty for the crime of family abuse is that of imprisonment for three to seven years (as amended by Law no. 19 of 2019 July 69).

This penalty is aggravated:

The eighteen-year-old minor who witnesses the mistreatment is considered an offender. 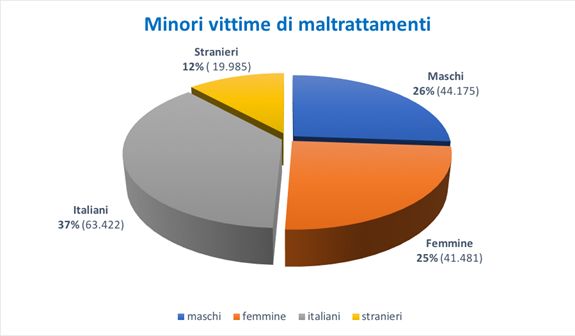 Mind you: the crime of mistreatment in the family can be prosecuted ex officio or at the lawsuit of the offended person.

It seems necessary to contact your trusted lawyer, specialized in the criminal, juvenile penal or family law sector, in order to make a specific, extremely technical and detailed defense aimed at correctly specifying and substantiating the facts of the case.

Law no. 19 of 2019 July 69 (containing "changes to the penal code, the code of criminal procedure and other provisions relating to the protection of victims of domestic and gender-based violence") had the great merit of providing accelerated formulas for the initiation of criminal proceedings and for the adoption of precautionary measures aimed at protecting the injured person: CD. red code.

In fact, once the acquired crime news has been acquired, the Police Officer immediately reports to the Public Prosecutor, also in oral form.

The Public Prosecutor, moreover, if he proceeds with the above crimes, within three days from the registration of the crime report, he must take more information from the offended person or from who reported the incident and, if necessary, take the urgent precautionary measures that he will consider more protective of the victim's interests.

This term can be extended only in the presence of essential protection requirements for minor subjects or for the confidentiality of investigations.

With regard to the prescription of the crime, following the 2012 news, it turns, as we have already had occasion to underline, to tighten the penalties and widen the possible "victims" of the crime, in the simple hypothesis, referred to in the first paragraph of art. . 572, the offense is prescribed in 12 years; on the other hand, they will be 18 in the case of serious injuries and 30 in the event of very serious injuries. In the event of death, resulting from mistreatment, the prescription will take effect from the 48th year.

Some judgments of the Court of Cassation regarding ill-treatment:

The maternity of the crime of maltreatment in the family remains integrated by a series of acts harmful to the physical integrity or the freedom or decorum of the taxable person against whom an overpowering conduct is thus put in place systematic such as to make coexistence particularly painful, since the psychic element must then materialize in the will of the agent to demean and overwhelm the victim by unifying the individual episodes of aggression to the moral and material sphere of the latter, not detecting, in the habitual nature of the offense, that during the period of time considered there are periods of normality and agreement with the taxable person in the agent's conduct. (Cassation n. 761/2019)

Legitimacy case law considers configurable, with a consolidated interpretative principle, the crime of mistreatment in the family even to the detriment of a person who is not cohabiting or no longer cohabiting with the agent, when the latter and the victim are linked by ties arising from marriage or filiation, considering that cohabitation does not it is a prerequisite of the crime and that the bonds of mutual respect remain intact even after personal separation, all the more when there is the need to fulfill the obligations of cooperation in the upkeep, education, education and moral assistance of minor children. (Cassation n. 50304/2018)

For the integration of the crime referred to in art. 572 of the Criminal Code, as evidenced by numerous pronouncements, a conduct of continuous "harassment" is necessary, which, although it can be interspersed with periods of "calm", must be a source of continuous discomfort and incompatible with normal living conditions, since otherwise the habitual behavior must be excluded, implicit in the legal structure of the case, and the individual facts that harm or endanger the personal safety, freedom or honor of a person of the family retain their autonomy of crimes against the person. (Cassation n. 27088/2017)

The crime of ill-treatment is configurable even if with the victim of the abuse there is a family relationship of mere fact, which can be inferred, even in the absence of a stable coexistence, from the implementation of a life project based on mutual solidarity and assistance. (Criminal Cassation, Section VI, sentence n.22915 of May 27, 2013)

The parent who takes overprotective behaviors that affect the psychophysical development of the child integrates the crime of mistreatment in the family, regardless of whether the minor has perceived such behaviors as abuse or has consented to it. (Criminal Cassation Section VI sentence no. 36503 of 10 October 2011)

For the integration of the crime of mistreatment in the family, in particular to the detriment of his wife, the religious belief of the author of the conduct is not relevant, since it cannot be considered that adherence to a creed, which does not sanction gender equality in the relationship marital, justify the mistreatment of his wife. (Criminal Cassation, Section VI sentence 28553 of 13 July 2009)

It is preferable to file a criminal complaint as soon as possible through a trusted lawyer with expertise in the field of family law and criminal law; this is to set in motion the protections that the law provides to victims.

The Cecatiello Law Firm advises its clients for the best management of criminal proceedings.