"The lawyer Armando Cecatiello is an expert matrimonialista supporter of a method to say goodbye correctly:" With the Collaborative Practice ... "

We report the article by Paola Molteni published in the weekly Vero concerning the publication of the lawyer's book Cecatiello entitled "Separate well with collaborative practice". (January 2018).

The cases of separation are constantly increasing in Italy. The lawyer Armando Cecatiello is an experienced matrimonialist who advocates a method to say goodbye correctly: "with the collaborative practice one leaves oneself without reducing the former spouse to poverty"; "The goal is to avoid wars, finding sustainable solutions for both parties", explains the lawyer, "and above all respectful for the lives of children".

Istat: there are more than 82 thousand divorces every year.

Meanwhile, separations and divorces increase in Italy. According to the latest ISTAT reports of the 2015, 91.706, the 2,7 percent more than the previous year, the 53,6 with minor children, separated. The boom, however, concerns the number of divorces, which was 82.469, up by 57 percent compared to 2014, with an incidence of 13,6 cases every 10 thousand inhabitants, a prevalence in Centronord compared to the South and a growth from 32 to 40 per cent of divorced with minor children. A surge that can only be partially associated with the introduction of the so-called short divorce, given that the law came into force in May. In almost nine cases out of ten child custody is shared, only the 8,9 percent remains exclusively for the mother. The share of separations in which the marital home is assigned to wives increases from 57,4 percent of 2005 to 60 of 2015 and arrives at 69 for mothers with at least one minor child. The number of separations with maintenance allowance paid by the father is also stable: 94 per cent.

"A civil divorce is a contradiction in terms". Thus said the lawyer for the film 'The War of the Roses', in which the fight was told without excluding the blows between two spouses about to leave. And in wars, both small and large, many separations are still being reduced: we are fighting for the maintenance allowance, for the time that the children will spend with one or the other parent, on vacations, on houses. They are almost always wars without winners who end up in court with agreements often not respected and people never in peace. Fortunately, however, even on the legal front we began to understand that in the family crises there is no battle to be won and that the victory consists in finding shared solutions, adjusted to the needs of all, starting with those of children.

It is according to this new perspective that was born in the United States and the collaborative practice is emerging everywhere, an alternative approach that offers spouses the possibility of sharing in a serene way, learning to lower the tone of conflict. It separates without resorting to the judge but through the work of a lawyer for each part, which allows husband and wife to choose the most favorable conditions for a new life, preserving as a higher interest that of children. Collaborative lawyers, in fact, trained in negotiation techniques and empathy, collaborate with an interdisciplinary team of professionals in the financial, psychological and communication fields to arrive at the formalization of an agreement that provides sustainable and respectful solutions, even in the most contentious events. "It is the satisfaction of the needs of each party to explain the importance of this new way of separating," notes Armando Cecatiello, Milanese matrimonial lawyer, for over twenty years on the front of family law cases, which has specialized in collaborative practice and has just published the book Separate well with collaborative practice (Red editions).

The assignment of the house

"We no longer work to formulate judicial measures that can even reduce one or both sides to poverty, but we are committed to identifying ways that allow everyone to start a new life. It is said that what has been considered for years the most important legal result of a separation responds to the concrete need of people. Let's take the question of the house, "says the expert," obtaining the home for a single spouse, leaving the other at the mercy of the expenses of a rent, may not be a success. For example, for a couple who lives in a house in the center and supports the costs of a mortgage with difficulty, it would be an advantage to sell that property and with the shares obtained buy two different apartments: it would lighten the economic weight and facilitate entry into a renewed life ". The collaborative practice aims at this goal: "The separation is no longer understood as a drama or a war but as a rebirth. So let us promise ourselves good even after a separation, to allow a serene future for ourselves and the other and to continue to remain together as parents. Only in this way will the poison of discord stop turning. And who knows, maybe someone will manage to change his mind about goodbye ». 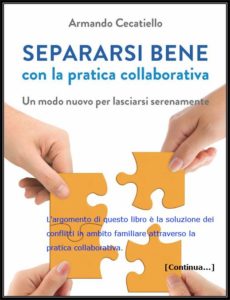 A new way to leave oneself peacefully. This is the "collaborative practice", an interdisciplinary approach (not only legal) through which in a separation no longer works to formulate judicial measures that can even reduce one or both sides to poverty, but we commit ourselves to identify paths that allow each one to rebuild their lives.

A book to understand, "Separating well with collaborative practice" (editions
Red, beside the cover) is the new book by the lawyer Armando Cecatiello. 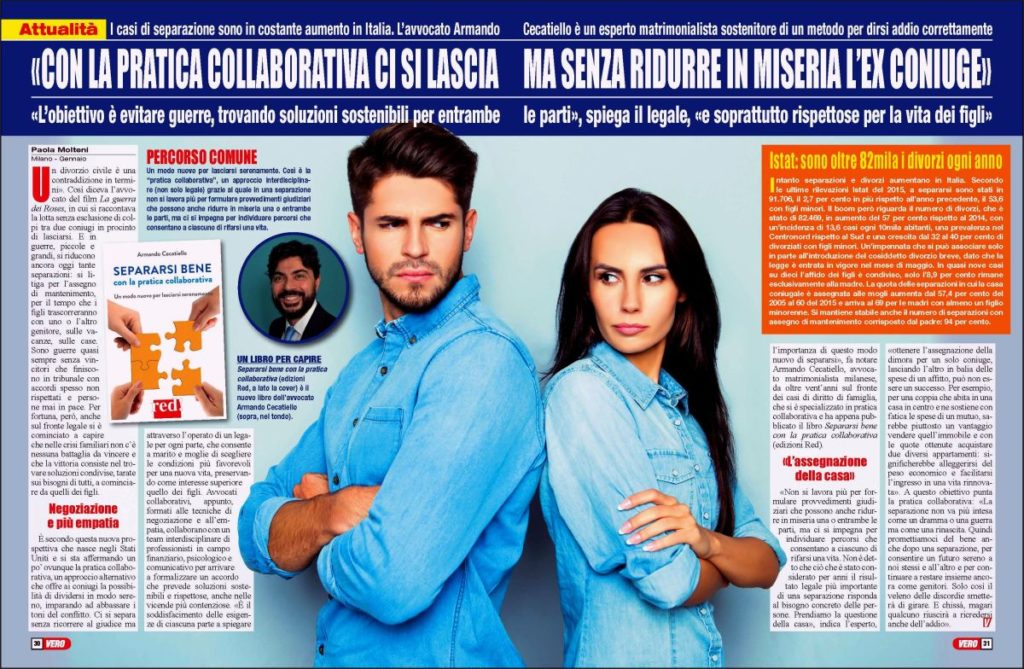 EdizioniVero: "Vero is a family weekly magazine aimed at a wide and transversal public with an editorial quality and graphic imprint that distinguishes it and rewards it in the segment. It creates a direct line with the world of entertainment but with an eye to current events, the political and cultural world, fashion and beauty trends. It also speaks of health, cooking, savings and offers many columns signed by familiar faces and professionals, doctors, lawyers. "