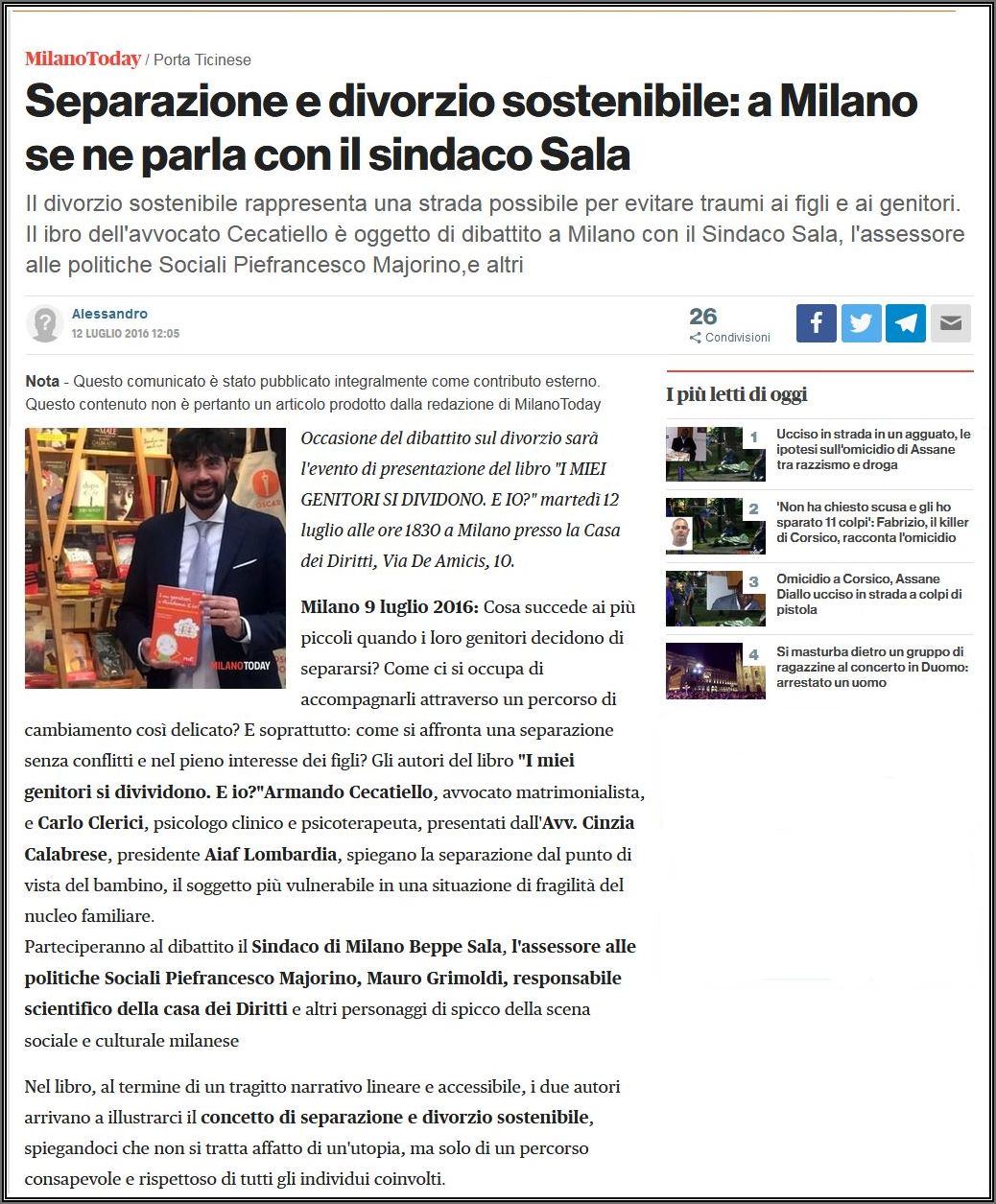 Sustainable divorce represents a possible way to avoid trauma to children and parents. The ibro of the lawyer Cecatiello is the subject of debate in Milan with the Mayor Sala, the councilor for social policies Piefrancesco Majorino, and others.

“The authors of the book “My parents split up. And I?" Armando Cecatiello, matrimonialist lawyer, e Carlo Clerici, clinical psychologist and psychotherapist, presented byAvv. Cinzia Calabrese, president Aiaf Lombardy, explain the separation from the point of view of the child, the most vulnerable subject in a situation of fragility of the family unit.
The debate will take part in the debate Mayor of Milan Beppe Sala, the councilor for social policies Piefrancesco Majorino, Mauro Grimoldi, scientific director of the house of rights, and other prominent personalities from the Milanese social and cultural scene

In the book, at the end of a linear and accessible narrative journey, the two authors come to illustrate the concept of separation and sustainable divorce, explaining that this is not a utopia at all, but only a conscious and respectful path of all the individuals involved. "

"The authors
Armando Cecatiello, a marriage lawyer in the Milan bar, has been dealing with separations and divorces in judicial and extrajudicial matters for twenty years. He has extensive experience in all matters relating to family law, from the simplest to the most complex, such as those characterized by intra-family violence. In any case, it analyzes both the patrimonial and the relational point of view. He is a supporter of "Collaborative Practice", a new method for resolving family law disputes that puts the parties at the center to find shared solutions and create new perspectives. He founded “Soccorso Rosa Onlus”, an association that also deals with the prevention of gender-based violence through educational programs in schools and companies. He is the author of Ora Basta! Instructions against Abuse, manual on violence against women, prevention and possible solutions and Bullo you broke me publication for children for the prevention of bullying, both published by Boston Publishing.
Carlo Alfredo Clerici he is a medical specialist in clinical psychology, psychotherapist and researcher of general psychology at the University of Milan. Among the various professional fields in which he is involved, for over twenty years he has been dealing with mental health in developmental age from a medical and research point of view. He is responsible for numerous national and international scientific publications. "