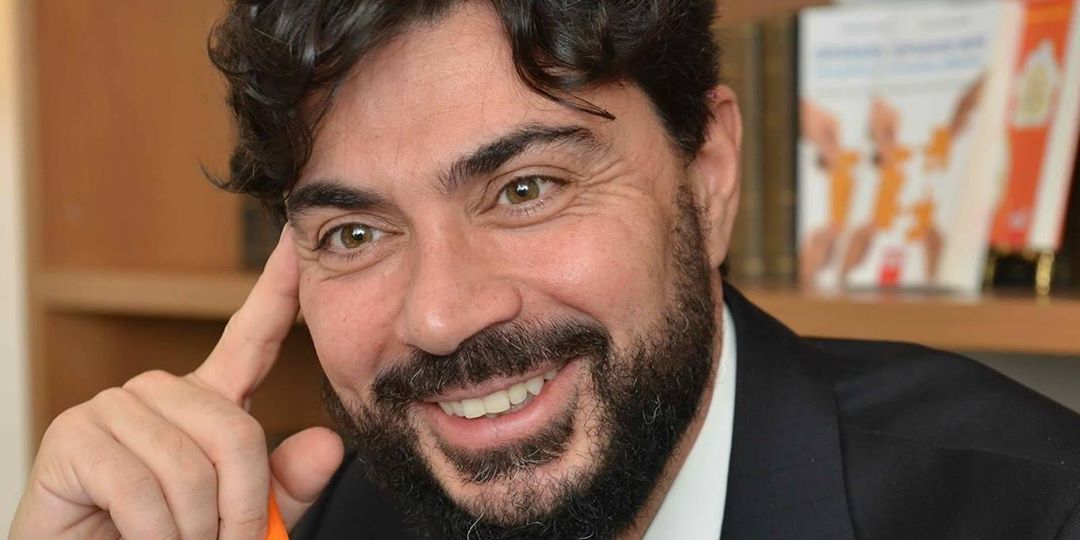 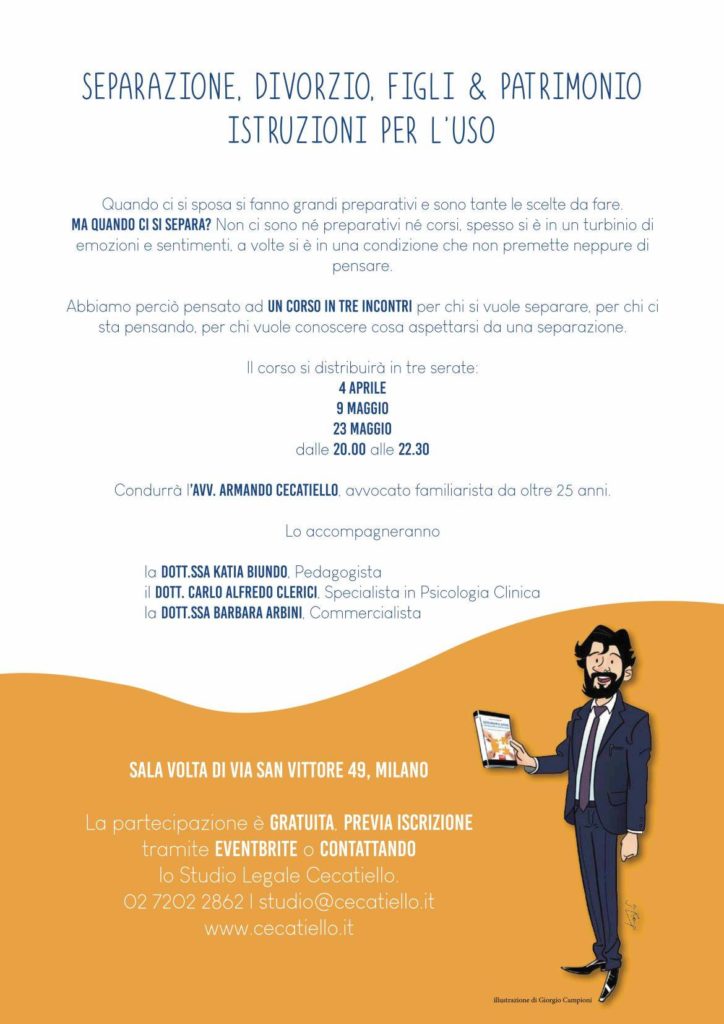 1 - You have devised a course to learn how to separate and divorce well. What's it about?

I have been dealing with family law as a lawyer for over 25 years, every day I see people who want to separate, divorce or want to protect themselves from an asset point of view in view of a future decision. While when you get married you prepare for months sometimes for years and those who get married in church also take the premarital course, at the moment of separation nobody knows what to do; we often move in an emotional storm. There are those who see it as a liberation those who suffer it, but very rarely do you arrive prepared. Hence the idea of ​​a course to learn to "separate well".

The objectives are different: to make it clear that separation can also be experienced as an opportunity, a moment of "renewal"; that children must be held in the utmost consideration and must in no way become victims of the conflict; that there are different ways to separate, that the economic aspects of separation must be well thought out and decisions must never be made hasty or tied to the emotion of the moment, one would end up repenting.

3 - How are the lessons practically carried out? And how much is it?

The course is structured in three meetings that I coordinate explaining all the legal aspects. In the first meeting I work alongside a pedagogist, in the second with an expert in clinical psychology and in the third I always involve an accountant. There are no costs for participants.

4 - How many members are there and what is the target of the participants?

At the moment for the next 9 meeting in May we already have thirty members, these are men and women from different backgrounds who are interested in understanding how to deal with this delicate moment at best. The course is aimed not only at couples about to separate, but also at all professionals who are confronted with the family crisis, such as teachers, psychologists and social workers.

5 - Can divorce really be better at the end of the course? Because?

Never as in the process of separation and divorce is it important to stop and reflect on what you really want, what are the choices to make and how to reschedule your life after an event that, for many, is painful and unexpected. The course allows you to have 360-degree indications from professionals who, with a multidisciplinary approach together with the lawyer, help people to reflect and plan their future life in the best possible way.

6 - What are the subjects taught?

They are not frontal lessons, they are open dialogues with the lawyer, the educator, the expert in clinical psychology and the accountant. Each contributes in a multidisciplinary perspective, often the participants ask questions and open a dialogue that serves everyone.

7 - How did you get the idea? Is this the first case in Italy?

I have always been involved in family law, both in Italy and in the United States and England. The project is new for Italy, in our country separation and divorce are often still seen as a taboo. Given the numbers, however, it is appropriate to talk about it and understand that it is necessary to spread a culture of respect and solidarity between former spouses even after separation, especially when there are children who, too often, become victims of their own parents because of the conflict. Initiatives of this type have already been made in the USA and England and the collaborative practice that I helped bring to Italy and which has now become even more famous thanks to the advertising of Gwineth Paltrow that calls it Conscious Divorce is increasingly widespread. On this topic I wrote two books “Separating Well with Collaborative Practice” and “A Mindful Divorce” both published by Red!

8 - Does the course follow the guidelines of the CNF?

Great strides have been made in the area of ​​separations and divorces. If we take into consideration a court like that of Milan, there are never standard decisions and, in hindsight, each sentence represents the solution to a specific family situation. In addition to the guidelines of the CNF, there is also the Milan protocol which is also spreading to other courts. Not only are there a division of expenses but also intelligent ways of managing them, all to prevent parents from quarreling after separation.

9 - Is it directed only to those who separate by consensus or also to others?

The course aims to explain that an agreement between spouses, or former cohabitants in the case of unmarried couples, is the best solution for themselves and for their children. The judicial path must be followed only if forced by complete lack of communication or by serious situations where it is necessary for the judicial authority to decide and supervise. Consider that very often it is the Tribubale that, to protect the children of extremely conflicting couples, appoints a lawyer to protect the minor, the so-called Special Curator. As a special guardian for minors, I often compare myself with young people who we can define as real victims of separation or divorce. I met teenagers forced to see educators, social workers, psychologists and ultimately me, as a special curator, and this only because of the mutual accusations of the parents made in the trials. Giving children a voice and "defending" them from their own parents is often a relief for them as well as a need. Explaining to parents the harm they are doing to their children is often useless as they are absorbed in what can be called a real war.

10 - Is it necessary to register as a couple or even each one for himself?

Many arrive alone, they have not yet communicated to the other partner the will to separate or are still thinking about it. Others come in pairs and sometimes come out with a knowing look.

11 - Do you only deal with divorces or even separations?

I deal with explaining the separation, divorce and even the end of cohabitation when there are children for whom custody, placement and maintenance allowance must be decided.

12 - Are there also other examples of such courses abroad? If so, can you mention any of them?

In the United States in Canada and in most of Europe, a new path is beginning to separate itself from that of collaborative practice, of which, as I have already said, I speak within my latest books.

13 - When you get divorced, what are the biggest bureaucratic difficulties?

The difficulty lies in the fact that after only six months from the consensual separation or one year from the judicial separation, the conditions of divorce can be discussed. It is a not very constructive situation where in a situation that cannot be substantially changed, another procedure must be faced. Our legislation does not yet provide for the possibility of a direct divorce without separation and hence the duplication of proceedings. In Italy it is however possible, when there is an element of extraneousness, such as when one of the partners is a foreign citizen, to apply the European Regulation which provides for the possibility of applying foreign law, In this way we can proceed directly with the divorce.

14 - Have you also imagined lessons that teach how to divide money and finances? Can you give me some concrete examples?

We always talk about it in the third meeting. Together with the accountant I explain how to understand your financial situation and how to make medium and long-term forecasts, and this to make optimal decisions for yourself and for your children. The economic aspects of separation and divorce are very important, understanding how to manage your finances, investments but also debts such as home loans and ongoing loans, is very important especially when you have to pay or receive a maintenance check. Understanding the possible tax levy on the separation and divorce allowance is also crucial.

15 - If you have any, can you quote me any anecdotes related to the course?

In the last meeting there was a very active couple. They were two cohabitants and both were fighting against the ex. At the end of the evening they understood how their battles were useless and how only the children of both were losing. A week later, I learned that they had made arrangements to move from judicial to consensual separation. Very often, people fight in court and don't even remember why.

To conclude, I would like to say that the end of a relationship is always a difficult moment that inevitably brings suffering to former partners and children. If we add, as often happens, resentment, desire for revenge and anger, the mixture can become explosive. It is no coincidence that the cases related to divorce proceedings are full of stories of personal, family and financial destruction.

In my work as a lawyer I have always tried to let customers rediscover the internal resources that, over the years, have led them to choose a partner, to build a family, to decide to have children, resources to which they must draw especially in the moment of separation.

One way to separate well is with the Collaborative Practice, a non-contentious method for resolving disputes centered on the parts and guided by them. Supported by an interdisciplinary team of professionals, the two former partners rediscover the ability to effectively communicate and identify the most advantageous solutions, rather than delegating to a judge every decision on the future of their family. The agreement thus reached exactly reflects their will: who, in fact, is more competent in resolving the differences of a separation, if not the spouses themselves? I talk about it in my book "Separate yourself well with Collaborative practice"Published by Red. but also "My parents separate. And I? "I wrote with the specialist in Clinical Psychology dott. Carlo Alfredo Clerici.

FIND OUT MORE ABOUT THE COURSE ▶ ️ CLICK HERE